Thousands of acres of former tidal wetlands currently at or below sea level around Humboldt Bay—including most of Manila, Samoa, Fairhaven, some residential and commercial areas of Eureka and Arcata, and many agricultural lands near the bay—are at risk of increased flooding in the coming years.

Sea level is projected to rise 18 inches along the California coast by 2050, with a 55-inch rise predicted by 2100. In some coastal areas of California, sea level rise is already bringing increased flooding, erosion, and salt-water intrusion into groundwater. Larger and larger areas will be vulnerable to flooding during major storms as sea level rises, as well as in the rare but catastrophic event of a major tsunami. In 2009, an analysis by the Pacific Institute estimated that critical infrastructure, coastal wetlands, and many billions in coastal properties face steadily increasing flood risks if no actions are taken. 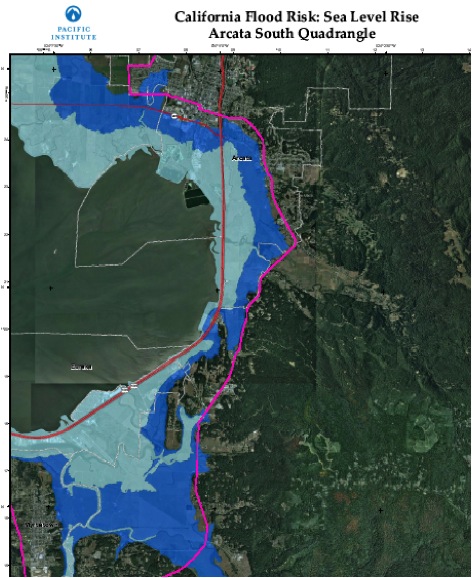 Compounding sea level rise locally is the recent discovery by geologists that the Humboldt Bay area is sinking due to the movement of the three tectonic plates that meet off the coast of Cape Mendocino—a process called subsidence.

Ongoing research conducted by Cascadia Geosciences and the Humboldt Bay Vertical Reference Group suggests that due to tectonic activity, land subsidence is approximately 2.5 mm/year on the North Spit. The rate of subsidence is higher in the South Bay, while the coast at Crescent City is uplifting at a rate similar to current sea level rise. Studies are ongoing, but preliminary data suggest that the Humboldt Bay area could see a two-fold effect—rising sea levels in addition to a subsiding coastline.

A 100-year-flood (calculated to be the level of flood water expected to be equaled or exceeded every 100 years on average) is used as a standard for planning, insurance, and environmental analysis.  People, infrastructure, and property around Humboldt Bay are already located in areas vulnerable to flooding from a 100-year event. Sea level rise will cause more frequent—and more damaging—floods to those already at risk, and will increase the size of coastal floodplains, placing new areas at risk to flooding.

High-water already reaches the top of most levees and overtops some during the highest tides of the year. This is compounded by wind and wave action from a typical winter storm, such as in 2003, when Mad River Slough levees were breached, flooding hundreds of acres of pasture. With sea level rise, such events are sure to happen more and more frequently.

It’s not just property and farmland at risk: coastal wetlands, including the remaining native salt marshes, will be drowned if they are not able to migrate inland to higher ground as sea level rises. This will result in loss of a unique ecosystem that provides habitat for a variety of plants, birds, fishes, and insects.

The good news is that with good planning, Humboldt County has a very high potential for wetlands to migrate inland rather than being completely inundated. Planning for future wetlands is critical to ecosystem health and could help reduce wave action that erodes and weakens levees. Such planning will require difficult decisions.

Although a number of state agencies are providing guidance, most of these decisions will rest with regional and local governing entities and will need to be implemented through local land use plans such as the cities’ and county’s Local Coastal Programs, all of which are in need of updating.

The longer we wait to plan for sea level rise, the more likely we will see short-sighted responses to property damage. Poorly-planned or emergency measures are likely to increase coastal armoring that only sends the problem somewhere else. With nearly 8,000 people expected to be living in the 100-year floodplain around Humboldt Bay by the time sea level increases 55 inches, the time to prepare for rising seas is now.

The Pacific Institute has developed maps predicting the future impacts of sea level rise on coastal California, including the Humboldt Bay area: