The Humboldt Bay area is experiencing the fastest rate of relative sea level rise on the West Coast. That's because tectonic activity is causing the ground beneath the bay is sinking at the same rate the ocean is rising. According to the California Ocean Protection Council's 2018 projections, sea level in the Humboldt Bay area is expected to rise 1 foot by 2030, 2 feet by 2050, and 3 feet by 2060. In late 2021, scientists reported that Antarctica's Thwaites Glacier is likely to collapse within 5 to 10 years, which could result in an additional 2 to 10.8 feet in sea level rise. The primary impacts from sea level rise are increases in flooding and erosion. Sea level rise will expand the area vulnerable to flooding during major storms, as well as in the rare but catastrophic event of a major tsunami.
The term 100-year flood is used as a standard for planning, insurance, and environmental analysis. People, infrastructure, and property are already located in areas vulnerable to flooding from a 100-year event. Sea level rise will cause more frequent—and more damaging—floods to those already at risk and will increase the size of the coastal floodplain, placing new areas at risk to flooding.

The lawsuit was part of a coordinated litigation attack by Marin, San Mateo County and the city of Imperial Beach.

The lawsuit, filed in Marin County Superior Court, alleges that “major corporate members of the fossil fuel industry, have known for nearly a half century that unrestricted production and use of their fossil fuel products create greenhouse gas pollution that warms the planet and changes our climate.”

Details
Jennifer Kalt for EcoNews
In the News
08 March 2017 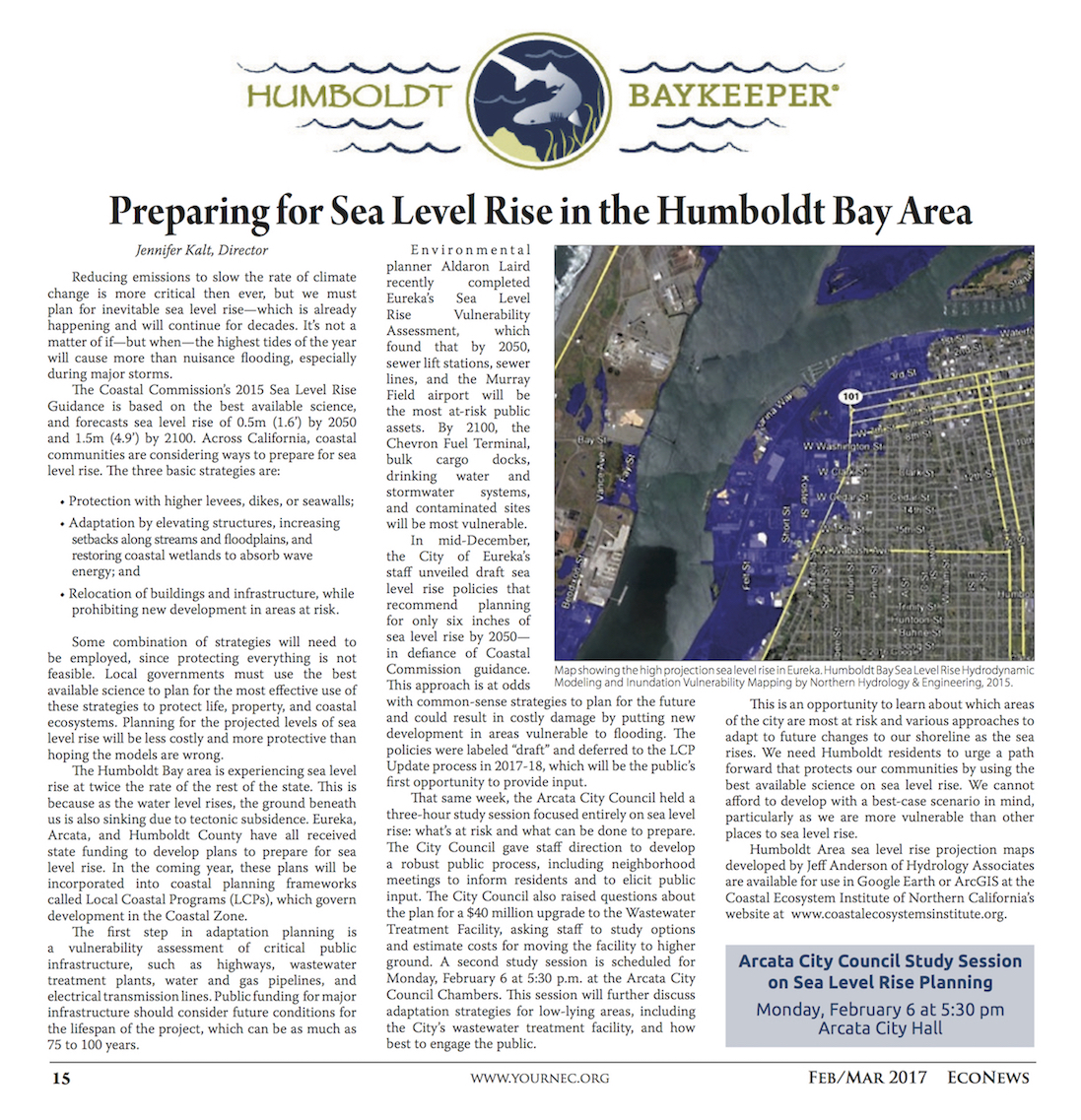 Homeowners are slowly growing wary of buying property in the areas most at risk, setting up a potential economic time bomb in an industry that is struggling to adapt.

MIAMI — Real estate agents looking to sell coastal properties usually focus on one thing: how close the home is to the water’s edge. But buyers are increasingly asking instead how far back it is from the waterline. How many feet above sea level? Is it fortified against storm surges? Does it have emergency power and sump pumps?

Rising sea levels are changing the way people think about waterfront real estate. Though demand remains strong and developers continue to build near the water in many coastal cities, homeowners across the nation are slowly growing wary of buying property in areas most vulnerable to the effects of climate change.

Last week the National Oceanic and Atmospheric Administration “NOAA” issued a new 44-page report, “Global and Regional Sea Level Rise Scenarios for the United States.”  They have created a new projection line for as much as 8.2 feet (2.5 meters) by 2100, the red colored line shown above, based upon a comprehensive assessment of the latest science primarily focused on Greenland and Antarctica. Eight feet of higher sustained sea level will be catastrophic for almost every coastal community in the world.

What makes this so hard to accept is that we have never had this level of sea level rise in all of human civilization. The last time sea level was higher than present was 120,000 years ago. Then it reached about 25 feet higher than present (7-8 meters). Based on the current temperature levels, we will almost certainly reach that height. The question is how soon. That does depend on how aggressively we work to reduce the level of greenhouse gases – largely carbon dioxide. In all my talks and briefings, I try to leave two takeaways:

A few places are beginning the process to look at how to adapt to higher sea level — in fact there are dozens of communities around the US and globally that are starting to take this huge challenge quite seriously. This new NOAA Report and the 8 foot red line should add urgency to begin the process and to think ahead — so that our investments in buildings and infrastructure are truly good investments, ones that will protect us today and be a good foundation for communities of the future.

“By 2050, this will be normal,” said Aldaron Laird, standing near the top of an Arcata wastewater treatment pond levee as waves broke at his feet.

A small group had trekked out to the Rising Tides Bench during a nine-foot King Tide on Dec. 13 for a discussion of sea level rise, its imminence and consequences.

While the bay’s present borders can more or less withstand today’s King Tides – also known as perigean spring tides, which coincide with maximum gravitational pull by the moon and sun – that won’t be the case when they ride in on top of tomorrow’s raised sea levels. At that point, seawater would overtop current levees and inundate coastal areas, including homes, farms, businesses and critical public infrastructure.

The higher sea levels are not an “if,” they’re a “when.” What we don’t know is exactly when.