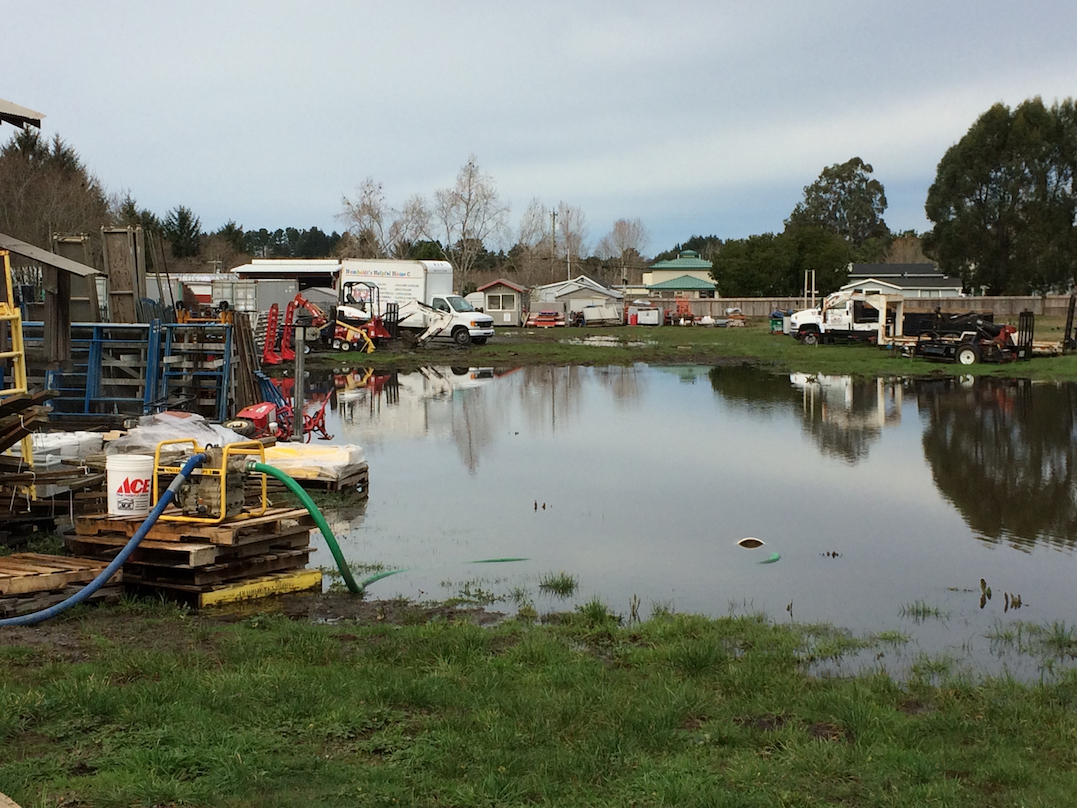 During the summer of 2015, owners of the new McKinleyville Ace Hardware on Central Avenue illegally filled wetlands with gravel for a parking lot in violation of the Clean Water Act and Humboldt County ordinance. After winter rains turned much of the area into a seasonal duck pond, insult was added to injury when the wetlands were illegally drained into a ditch that discharges into Widow White Creek, a tributary to the Mad River that once supported coho salmon.

Photo: After illegally filling part of a seasonal wetland with gravel for a new parking lot, McKinleyville Ace Hardware illegally drained the remaining wetland into a ditch along Central Avenue that discharges into Widow White Creek, a Mad River tributary that once supported coho salmon. This photo shows the pump used (front left) and seasonal pond. Photo by J. Kalt, January 15, 2016.

Baykeeper’s research revealed that the new store had been approved by Humboldt County’s Building Department without federal permits required for filling wetlands, and without permits required by the County’s ordinance that protects wetlands and streams, despite the fact that County Planning & Building maps indicate that these wetlands were designated on the U.S. Fish & Wildlife Service’s National Wetlands Inventory in the 1970s. Subsequent inspections by wetland experts hired by the property owners clearly supported that designation.

In August 2015, the landowners signed an Enforcement Agreement with Humboldt County, agreeing to remedy the violations within two years. In January 2016, despite this agreement and knowing full well that they were in violation, the owners continued to fill the wetland with additional gravel to “control” the water in the new parking lot during one of the wettest winters in recent years. Contrary to the project’s Regional Water Quality Control Board permit outlining proper treatment of stormwater from the project, half of the building’s roof runoff was piped to the wetland, discharging runoff directly into the wetland rather than to an appropriately-sited bioswale designed to infiltrate pollutants into the ground before they could reach the wetland.

On February 5, attorneys representing Humboldt Baykeeper issued a 60-day notice to the landowners and grading contractors who illegally placed the wetland fill. The 60-day notice is required under the Clean Water Act to allow the defendants to remedy the violation, thereby avoiding costly legal action. On February 24, contractors removed some of the illegal fill from the wetland, and draining the wetland has since ceased, allowing the wetland to return to its normal winter levels.

Much of the McKinleyville area historically supported seasonal wetlands, most of which have been destroyed and degraded by poorly-planned or unpermitted development over the years, despite County regulations designed to protect wetlands and streams. The Redwood Region Audubon Society successfully sued the County for failing to protect McKinleyville wetlands in the 1990s, leading to the adoption of the County’s poorly-enforced grading ordinance.

Unfortunately, the County’s failure to enforce its own permitting requirements, which should have triggered environmental review, allowed development to proceed without adequate protections for water quality and aquatic habitats.

Lack of oversight by local, state, and federal agencies responsible for protecting water quality, salmon streams, and wildlife habitat contributed to an unfortunate situation that could have been avoided by the enforcement of existing County, state, and federal environmental protections.