Widow White Creek has been impacted by urbanization of 25% of the watershed, as well as logging and low-density residential development in the upper watershed. It historically supported coho salmon, steelhead trout, cutthroat trout, three-spine stickleback, and sculpins, and thus is an important target for restoration. Citizen "First Flush" monitoring over several years has found extremely high levels of fecal coliform in the creek, particularly at monitoring sites near residential and commercial areas. The sources of the coliform bacteria are unknown.

Most of the Widow White Creek watershed lies within the unincorporated community of McKinleyville. The watershed has lost 33% of its timber and meadow areas compared to historic conditions.

By 2001, one-quarter of the watershed was classified as “dense urban” by Klein and Anderson. In their analysis on the effects of urbanization on flood frequency estimates for lower Widow White Creek, they found that the 2-year flood flow has increased 229% over pre-development conditions.

As McKinleyville's agricultural lands and forests were converted to residential developments, increased runoff from pavement and rooftops caused higher peak flows during storm events. This increase in stormwater runoff resulted in erosion, bank destabilization, and sedimentation in lower Widow White Creek as the channel expands to accommodate the increased flow, damaging riparian and aquatic habitat conditions.

Stream bank erosion degrades rearing and spawning habitat for salmonids and other aquatic species. Spawning habitat is negatively impacted as spaces within gravels are filled with fine sediment from eroding banks, depriving incubating eggs of oxygenated water while making it physically impossible for emerging alevins to swim out of the gravel and into the water column. 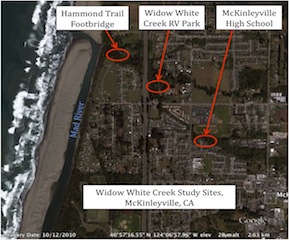 Three study sites were selected along lower Widow White Creek. Site 1 is in the lower reach, where Redwood Community Action Agency has completed a variety of restoration projects, including a 2008 bank stabilization project to reduce erosion and restore fish habitat. Site 2 is between the Widow White Creek RV Park and a gas station on Murray Road near Highway 101. Site 3 is south of McKinleyville High School, between the school athletic field and a residential neighborhood. These sites were chosen to represent different habitat conditions and land use, but also based on accessibility.

With three years of data, it is increasingly clear that the restoration activities undertaken by Redwood Community Action Agency in the lower reach of the creek have had a positive effect on instream conditions, pointing to the need for such restoration work further upstream, where aquatic habitat conditions are poor.

Below are some highlights from the Interns' research over the past three years.

Benthic Macroinvertebrates: Site 1 had the best Biotic Index and %EPT, indicating a large proportion of water-quality sensitive taxa. These metrics indicate the best habitat and water quality of the three sample sites. The taxa evenness percentage suggests a good range of different taxa without one group dominating over the rest. The low taxa abundance for this site is due to the low sample size of 66 individuals with four kick samples. Site 3 had the worst scores for Biotic Index, %EPT, and taxa evenness; this sample was dominated by almost 90% amphipods. This is likely due to the substrate being composed entirely of sand, indicating poor habitat quality for invertebrates, which need interstitial spaces between pebbles and gravel.

The upper reaches were more impacted than the lower, restored reach.  It was noted that the upper reaches where centrally located in McKinleyville, and therefore more closely surrounded by urbanization with impervious surfaces.

Results: The bioassessment reveals that further downstream the water quality improves and is indicated by a huge leap in ephemeroptera, which is a pollutant sensitive species. Upstream, sites 1 and 2, there is a noticeable increase in amphipoda and oligochaeta, which are very pollutant tolerant species. This indicates a decrease in stream quality further upstream.

For more info on the Widow White Creek Internship Program, contact Jennifer Kalt at This email address is being protected from spambots. You need JavaScript enabled to view it. or call 268-8897.