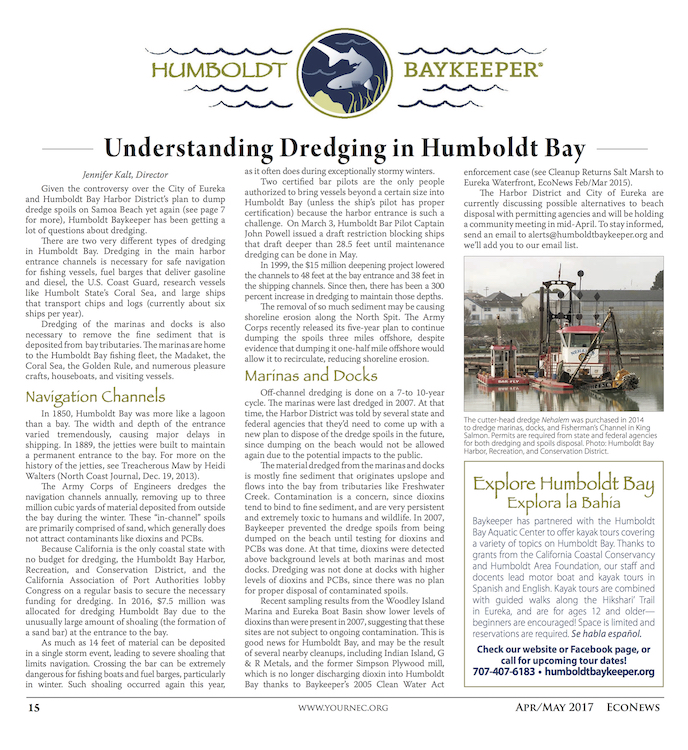 Given the controversy over the City of Eureka and Humboldt Bay Harbor District’s plan to dump dredge spoils on Samoa Beach yet again, Humboldt Baykeeper has been getting a lot of questions about dredging.

There are two very different types of dredging in Humboldt Bay. Dredging in the main harbor entrance channels is necessary for safe navigation for fishing vessels, fuel barges that deliver gasoline and diesel, the U.S. Coast Guard, research vessels like Humbolt State’s Coral Sea, and large ships that transport chips and logs (currently about six ships per year).

Dredging of the marinas and docks is also necessary to remove the fine sediment that is deposited from  bay tributaries. The marinas are home to the Humboldt Bay fishing fleet, the Madaket, the Coral Sea, the Golden Rule, and numerous pleasure crafts, houseboats, and visiting vessels.

In 1850, Humboldt Bay was more like a lagoon than a bay. The width and depth of the entrance varied tremendously, causing major delays in shipping. In 1889, the jetties were built to maintain a permanent entrance to the bay. For more on the history of the jetties, see Treacherous Maw by Heidi Walters (North Coast Journal, Dec. 19, 2013).

The Army Corps of Engineers dredges the navigation channels annually, removing up to three million cubic yards of material deposited from outside the bay during the winter. These “in-channel” spoils are primarily comprised of sand, which generally does not attract contaminants like dioxins and PCBs.

Because California is the only coastal state with no budget for dredging, the Humboldt Bay Harbor, Recreation, and Conservation District, and the California Association of Port Authorities lobby Congress on a regular basis to secure the necessary funding for dredging. In 2016, $7.5 million was allocated for dredging Humboldt Bay due to the unusually large amount of shoaling (the formation of a sand bar) at the entrance to the bay.

As much as 14 feet of material can be deposited in a single storm event, leading to severe shoaling that limits navigation. Crossing the bar can be extremely dangerous for fishing boats and fuel barges, particularly in winter. Such shoaling occurred again this year, as it often does during exceptionally stormy winters.

Two certified bar pilots are the only people authorized to bring vessels beyond a certain size into Humboldt Bay (unless the ship’s pilot has proper certification) because the harbor entrance is such a challenge.  On March 3, Humboldt Bar Pilot Captain John Powell issued a draft restriction blocking ships that draft deeper than 28.5 feet until maintenance dredging can be done in May.

In 1999, the $15 million deepening project lowered the channels to 48 feet at the bay entrance and 38 feet in the shipping channels. Since then, there has been a 300 percent increase in dredging to maintain those depths.

The removal of so much sediment may be causing shoreline erosion along the North Spit. The Army Corps recently released its five-year plan to continue dumping the spoils three miles offshore, despite evidence that dumping it one-half mile offshore would allow it to recirculate, reducing shoreline erosion.

Off-channel dredging is done on a 7-to 10-year cycle. The marinas were last dredged in 2007. At that time, the Harbor District was told by several state and federal agencies that they’d need to come up with a new plan to dispose of the dredge spoils in the future, since dumping on the beach would not be allowed again due to the potential impacts to the public.

The material dredged from the marinas and docks is mostly fine sediment that originates upslope and flows into the bay from tributaries like Freshwater Creek. Contamination is a concern, since dioxins tend to bind to fine sediment, and are very persistent and extremely toxic to humans and wildlife. In 2007, Baykeeper prevented the dredge spoils from being dumped on the beach until testing for dioxins and PCBs was done. At that time, dioxins were detected above background levels at both marinas and most docks. Dredging was not done at docks with higher levels of dioxins and PCBs, since there was no plan for proper disposal of contaminated spoils.

Recent sampling results from the Woodley Island Marina and Eureka Boat Basin show lower levels of dioxins than were present in 2007, suggesting that these sites are not subject to ongoing contamination. This is good news for Humboldt Bay, and may be the result of several nearby cleanups, including Indian Island, G & R Metals, and the former Simpson Plywood mill, which is no longer discharging dioxin into Humboldt Bay thanks to Baykeeper’s 2005 Clean Water Act enforcement case (see Cleanup Returns Salt Marsh to Eureka Waterfront, EcoNews Feb/Mar 2015).

The Harbor District and City of Eureka are currently discussing possible alternatives to beach disposal with permitting agencies and will be holding a community meeting in mid-April. To stay informed, send an email to This email address is being protected from spambots. You need JavaScript enabled to view it. and we’ll add you to our email list.