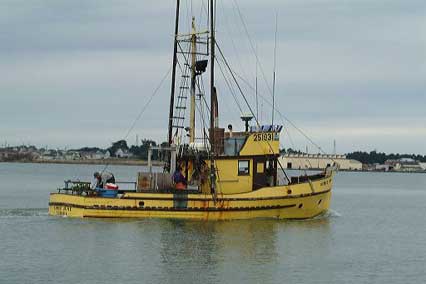 Coho Salmon, Chinook Salmon, and Steelhead all pass through Humboldt Bay on their way to the bay's tributaries to spawn. In the past, the abundance of many species of fish was emblematic of the area, along with a vibrant fishing community. Today, declining populations are one of the reasons for Baykeeper’s work to clean-up the Bay’s waters and work to restore a healthy bay ecosystem. The small (rarely exceeding 2”) Tidewater Goby, an endangered species, is limited to the coast of California, and research suggests that Humboldt Bay supports one of the core populations that colonize other areas.

Although impacted by logging, development, and the toxic legacy of industrial use, sport and commercial fishing in and around the Bay is still a significant part of the local economy. In the past, the fishing industry supported a large part of the local economy. This has changed recently with the closure of the commercial salmon season two years in a row due to low population numbers.

Over 200 commercial vessels still list Eureka as homeport and over 500 vessels from other west coast ports use the Bay’s facilities annually, delivering catch to the seafood buyers located in Humboldt County. Despite diminishing fisheries, Humboldt Bay is still one of the largest oyster suppliers, providing 90% of the oysters in California. The Bay’s commercial fleet contains a large number of crabbing boats, which harvest Dungeness crab along the coast. The Bay plays an important part in the Dungeness crab life cycle, as it provides ideal spawning and nursery grounds in the Bay’s eelgrass beds.

One of the goals of Humboldt Baykeeper is to hold past polluters responsible for the impacts they have a had on the water quality of the Bay, in hopes that one day the Bay and adjacent coastline can once again host a healthy and lucrative fishery for the Humboldt Bay community.