Since Baykeeper’s 2006 success in getting Humboldt Bay designated as impaired by dioxin, sampling for this long-lasting contaminant has become common for dredging, restoration, and development projects. One recent study has revealed a major dioxin hotspot in Humboldt Bay near the Arcata Marsh. The good news is that ongoing monitoring at a former lumber mill in Eureka has shown that the cleanup brought by Baykeeper’s legal action has been effective. 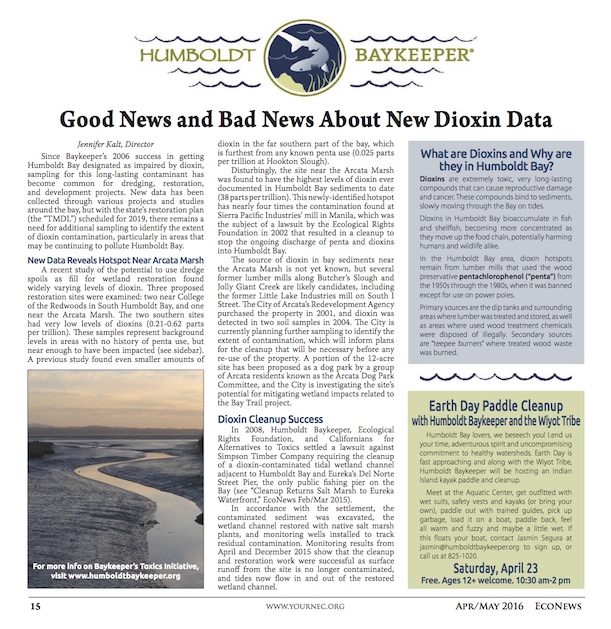 New data has been collected through various projects and studies around the bay, but with the state’s restoration plan (the “TMDL”) scheduled for 2019, there remains a need for additional sampling to identify the extent of dioxin contamination, particularly in areas that may be continuing to pollute Humboldt Bay.

A recent study of the potential to use dredge spoils as fill for wetland restoration found widely varying levels of dioxin. ree proposed restoration sites were examined: two near College of the Redwoods in South Humboldt Bay, and one near the Arcata Marsh. e two southern sites had very low levels of dioxins (0.21-0.62 parts per trillion). ese samples represent background levels in areas with no history of penta use, but near enough to have been impacted (see sidebar). A previous study found even smaller amounts of dioxin in the far southern part of the bay, which is furthest from any known penta use (0.025 parts per trillion at Hookton Slough).

Disturbingly, the site near the Arcata Marsh was found to have the highest levels of dioxin ever documented in Humboldt Bay sediments to date (38 parts per trillion). is newly-identified hotspot has nearly four times the contamination found at Sierra Pacific Industries’ mill in Manila, which was the subject of a lawsuit by the Ecological Rights Foundation in 2002 that resulted in a cleanup to stop the ongoing discharge of penta and dioxins into Humboldt Bay.

The source of dioxin in bay sediments near the Arcata Marsh is not yet known, but several former lumber mills along Butcher’s Slough and Jolly Giant Creek are likely candidates, including the former Little Lake Industries mill on South I Street. e City of Arcata’s Redevelopment Agency purchased the property in 2001, and dioxin was detected in two soil samples in 2004. e City is currently planning further sampling to identify the extent of contamination, which will inform plans for the cleanup that will be necessary before any re-use of the property. A portion of the 12-acre site has been proposed as a dog park by a group of Arcata residents known as the Arcata Dog Park Committee, and the City is investigating the site’s potential for mitigating wetland impacts related to the Bay Trail project.

In accordance with the settlement, the contaminated sediment was excavated, the wetland channel restored with native salt marsh plants, and monitoring wells installed to track residual contamination. Monitoring results from April and December 2015 show that the cleanup and restoration work were successful as surface runoff from the site is no longer contaminated, and tides now flow in and out of the restored wetland channel.

What are Dioxins and Why are they in Humboldt Bay?

Dioxins are extremely toxic, very long-lasting compounds that can cause reproductive damage and cancer. These compounds bind to sediments, slowly moving through the Bay on tides. Dioxins in Humboldt Bay bioaccumulate in fish and shellfish, becoming more concentrated as they move up the food chain, potentially harming humans and wildlife alike.

In the Humboldt Bay area, dioxin hotspots remain from lumber mills that used the wood preservative pentachlorophenol (“penta”) from the 1950s through the 1980s, when it was banned except for use on power poles. Primary sources are the dip tanks and surrounding areas where lumber was treated and stored, as well as areas where used wood treatment chemicals were disposed of illegally. Secondary sources are “teepee burners” where treated wood waste was burned.