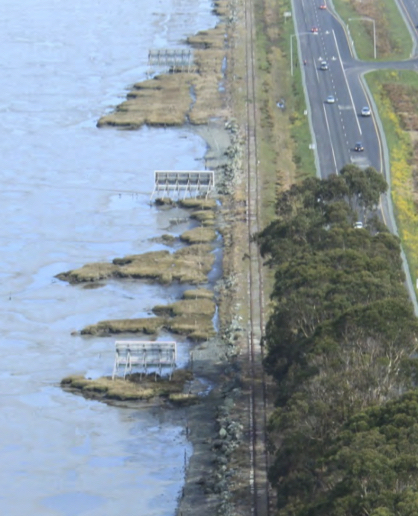 Join us on April 23 at 5:30 pm at the Wharfinger Building at 1 Marina Way in Eureka to learn what CalTrans is proposing now, and to call for a local Coastal Commission hearing. A project of this magnitude should include a local hearing with a real opportunity for public input, not simply an informational meeting with no info provide in advance.

CalTrans will hold a public meeting in Eureka on the 101 Safety Corridor Improvement Project, which proposes major changes to the highway between Arcata and Eureka.

The 2013 version of the project proposed an interchange at Indianola Cutoff, installing a left turn signal at Jacobs Avenue, and closing all other medians to eliminate dangerous left turns across two lanes of traffic. Although CalTrans denied plans to increase the speed limit, state law will undoubtedly result in an increase from the 50 mph speed limit that was adopted in 2002.

After more than 10 years of planning, the project is set to be considered at the June Coastal Commission hearing in San Diego. CalTrans claims it can't possibly wait until August - when the Coastal Commission meets in Eureka - for reasons having to do with funding. Tuesday's meeting is an apparent attempt to make up for the lack of public comment that will result from insisting on the final hearing in San Diego.

Unfortunately, the latest info provided by CalTrans is from 2017. The public has not been provided with any information on the outstanding issues addressed at a 2013 Coastal Commission hearing, when CalTrans was directed to:

Additional concerns raised in 2013 included growth-inducing effects in the Indianola area, as well as increased traffic on 255 through Manila and on Old Arcata Road through Bayside.

Ten billboards were removed as a result of the Coastal Commission's direction to CalTrans, but four remain on the west side of the highway - and three of those are on public trust wetlands - actually IN the waters of Humboldt Bay. For more on the history of our battle over billboards, click HERE.

For more info on the project: