The Humboldt County Planning Commission is set to consider sweeping zoning changes at its meeting tomorrow for hundreds of thousands of acres of properties throughout the county.

The zoning text amendments and reclassifications are being proposed to implement the county’s general plan update, which the board passed last year. But they are coming before the planning commission tomorrow night along with 30 owner-requested zoning changes, including a couple from Mercer-Fraser Co. that some worry will re-open the door to a controversial proposal to build a cannabis manufacturing facility along the Mad River near where the Humboldt Bay Municipal Water District pulls the area’s drinking water.

Humboldt Baykeeper Director Jennifer Kalt said she’s still reviewing the agenda packet for tomorrow’s meeting but indicated the owner-requested zoning changes are of primary concern to her, noting that they include about a dozen requests to rezone gravel queries throughout the county in a way that would accommodate cannabis manufacturing as well.

And Kalt said it’s important to remember that this is essentially the last chance for public input and review for these projects, noting that once zoning changes are adopted some uses become principally permitted, meaning they are not subject to conditional use or environmental review processes. As an example, she pointed to the rezoning of a property on McKinleyville’s Murray Road that is now the future home of a Dollar General store, which despite some widespread neighborhood concerns is now principally permitted.

The primary concern of many looking at tomorrow night’s agenda is the Mercer-Fraser Co. property in Glendale. 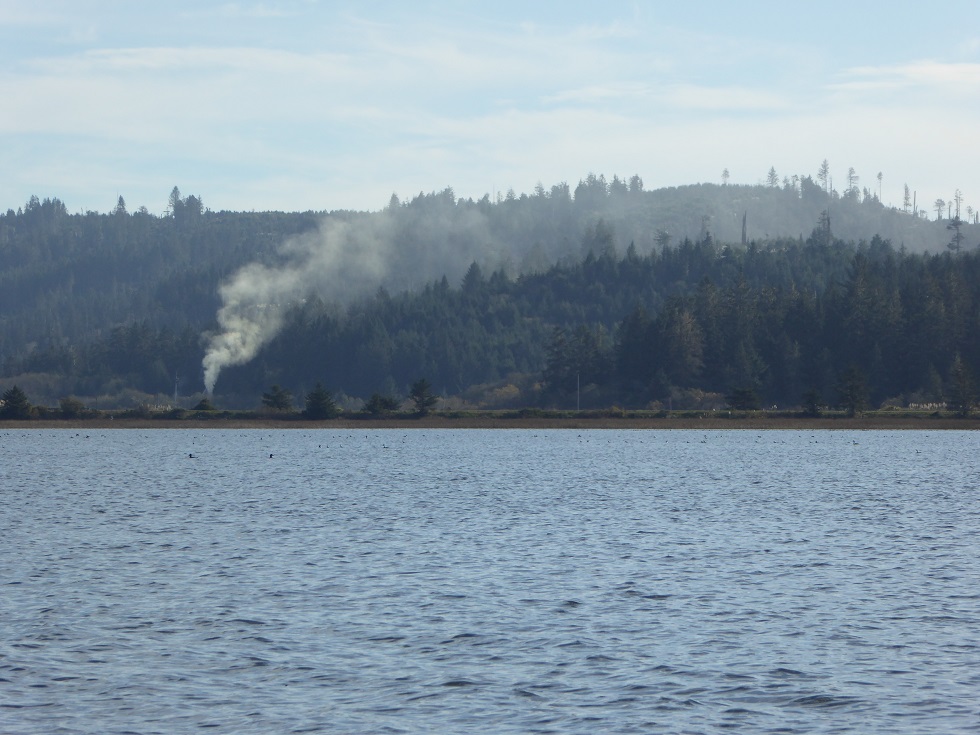 In November, Humboldt Baykeeper filed an appeal to the California Coastal Commission of Mercer Fraser's asphalt plant at Big Lagoon. Mercer-Fraser Co. has waived the deadline for the appeal hearing. We will keep you informed of next steps.

Photo: Asphalt plant east of Big Lagoon operating under a temporary permit in 2017.

The Humboldt County Planning Commission has approved plans for the continued operation of an asphalt plant less than a half-mile from iconic Big Lagoon despite objections that all the relevant data about the plant has not yet been received and over requests to postpone the decision until next month.

The plant has been operating for several months on an expired permit.

With commissioners Alan Bongio and Brian Mitchell absent, and after a motion to postpone the vote failed, the permit passed with a 4-1 vote, with Noah Levy dissenting.

Humboldt Baykeeper Director Jennifer Kalt thought it would be prudent to know just what chemicals might be contaminating the site, and in mid-August, asked the Planning Department for further information. She followed her initial queries with a California Public Records Act request and was promised her information by Sept. 24, four days after the commission was scheduled to act on the application. She asked the commission to postpone the hearing until after the requested information has been received.

Kalt also noted that the project area is home to several endangered species including coho and Chinook salmon, and cutthroat trout. She was concerned about possible flood risks and what hazardous materials may exist on the site.

The Ecological Rights Foundation, based in Garberville (Humboldt County), alleged in its 2010 lawsuit that dioxin, a chemical that causes cancer and birth defects, was carried by storm water runoff from treated wooden utility poles, sawdust and wood waste into the two bays. The settlement was signed by U.S. District Judge Richard Seeborg in San Francisco on Friday and announced by the foundation on Monday.

Under the agreement, which will remain in effect through 2026, PG&E will identify storage yards containing treated poles and will test and implement technologies for reducing dioxin runoff to levels that pose lower risk to human health and wildlife.

Editor's Note: Richard Marks is seeking re-election to the Humboldt Bay Harbor, Recreation and Conservation District’s Board of Commissioners on Nov. 6. Eureka City Councilwoman Marian Brady is challenging him for the Division 4 seat, which covers the majority of Eureka. On Aug. 21, the Times-Standard emailed both candidates, asking them to answer five questions regarding their experience and their stance on important issues facing their community. The replies of respondents appear below.

Q: Please describe your experience and what you bring to the job.

A: Humboldt Bay is an amazing place that provides so much for our county. That is why it is imperative that we work together to promote and protect this economic, recreational and ecological treasure at the center of our community.

For the last nine years I’ve had the honor to serve the 4th Division on the Humboldt Bay Harbor Recreation and Conservation District. During this time, shipping is dramatically up, there are more jobs, the bay is cleaner and more productive and the financial health of the district has improved greatly.